A conspicuous pattern has emerged in our family. When, on occasion, we receive unexpected finances, a crazy-big need comes along soon after. It means the “extra” resources are needed for that “extra” expense. That really used to frustrate me. “Aaach – I thought we would have a surplus. Now it has vanished!”

But recently that perspective changed. You see, God knew the need was coming. And instead of allowing it to cause a crisis, He supplied the solution ahead of time.

The three wise men who came to visit baby Jesus brought gifts of gold, frankincense and myrrh. Very valuable items! I don’t think Mary just kept them on the shelf to admire and look pretty. Of course, the Bible doesn’t tell us exactly, but we know that soon after the family had to flee to Egypt. Joseph had to leave his business and take his family to a foreign land. How would they pay the transport? How would they survive in a new place? Is it possible that those gifts became the provision they needed to keep the family going?

Whatever the case, it is a reminder this Christmas that God HAS a plan. He sent Jesus as a baby with the plan to redeem mankind back into relationship with Him. He had it figured out then – and still does today.

So, even though we don’t know all that’s in store in the coming year(s), God does. He has it covered.

Have a blessed, amazing Christmas and wonderful year in 2020!

My Heart Leaped for Joy

It was a special day. In the company of a missionary friend, we were walking casually through the market of a coastal town. All of the sudden, our friend stopped. “There she is,” he exclaimed under his breath. I watched in awe as the buibui-clad young believer gave our friend a big hug, her face aglow.

She was walking home from an Islamic class. In the mosque and at the mandatory classes, she kneels down facing Mecca like all the others, but prays in the name of Jesus. Excited when she found out who we were, she asked if we could get together the next day. 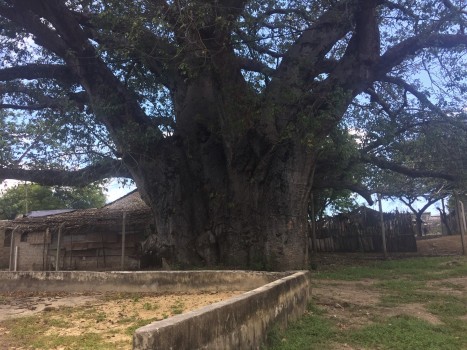 Sure enough, our friend organized for a private meeting. It was delightful to listen to her testimony. Jesus has answered many of her prayers. She is now trusting for the salvation of her friends and parents.

This young believer is not the only secret Christian; the number is increasing. So is the opposition.

We are heading back to Kenya after a “quick trip” to the States and Canada. Several highlights stand out:

The Stasi tribe. We visited Luke and Brittany and family, now together with their six children AT HOME (where they belong!) When Luke and their newly-adopted son Obadiah from Nigeria were stuck with us for about 4 months earlier this year, waiting and waiting and waiting, no one knew when the visa allowing Obi into the States would be issued. While together  last week, I just kept thinking, “this story could so easily be different.” What could be more fulfilling than to see Obi and his new family united?

DOVE House of Destiny. We prayed with Philip and Kerina Omondi and family, now in Toronto. When Omondi’s were stuck in Uganda, waiting and waiting and waiting for the finances, permits and paperwork to get into Canada, no one knew when (or if) it would ever work out. But it did! How precious to be there to launch, together with members of DOVE Canada, the new church plant. What could be more fulfilling than to release and bless a spiritual son and daughter on the next step of their calling?

The DOVE Center (TDC) Advisory Board. We had the first TDC Advisory Board concall last week. When we were searching for land for DOVE Nairobi back in 2005, we promised the Lord that any property acquired would be dedicated to a 24/7 prayer center. After the purchase of land in 2007, we have been waiting and waiting for the prayer center vision to move out of the stuck stage. Having a board is obviously just an initial step, but it is a step. What a faithful God we serve!

What has brought you fulfillment in recent days?

Tensions were high among nomadic tribes in northeastern Kenya. The Boran and the Gabra had started a revenge cycle. It was a familiar pattern among tribes in the area. This time, a Boran man suspected to be a cattle thief was killed by some Gabra youth. Two days later, two Gabra were killed. The alarm was raised. Boran warriors were preparing to raid, but the Gabra were alert and wanted to attack first.

The situation was almost getting out of hand when the Eleventh Hour Network, headed by Rev. Tesfaye Getachew, stepped in. Church leaders from all the communities did not want the violence to escalate, so they urgently called for three days of fasting and repentance. That is when I was called to help facilitate reconciliation.

Reconciliation is more likely to happen when people are willing to talk to each other! So, talking is where we started. The first day, Friday, was difficult. People were suspicious of each other. There was not very much interaction. I gave a teaching but also told stories of reconciliation, particularly of my experience with the Hutu and Tutsi in Bujumbura, Burundi after the 1996 genocide.

By the second day, men and women representing the five main tribes were present: Boran, Gabra, Burji, Rendile and Samburu. Things were starting to break open. They began to confess publicly on behalf of their tribes, repenting of specific evil acts. These were tender moments when many people in the audience went down on their knees and cried, some weeping loudly.

On Sunday, the last day, it seemed as if heavens literally opened. After more teachings and much prayer, representatives from the tribes came forward to wash one another’s feet. That, for me, was very moving.

The region had been very dry, but I felt the Lord telling me that it was going to rain. I took a risk and declared the same at the end of the meeting. We received a call the next day from excited pastors, reporting that there had been a heavy rainstorm soon after we left. Heaven was open, indeed. I pray it remains open for these precious children of God.

We must Shut the Door

Why did those words1, among pages of notes taken at our DOVE Conference, jump off the page at me this week? Obviously, because I needed to hear them–again! As Christ-followers, it is absolutely necessary for us to intentionally block off time to commune with God and intentionally block out all the distractions. Intentionally is the key word. It will not happen unless we make it happen.

Here in Maputo, Mozambique, I am blocked off from most distractions (especially because I chose not to connect to a roaming cell phone network). Even though far from home, it feels like coming home to a place of quiet and peace. I reflect.

Matthew chapter 24 talks about increased persecution in the end times. In the midst of it, “the love of most will grow cold.” Could part of the “persecution” that causes coldness of spirit be all the technology that makes us (me) accessible and distractible 24/7? Or the schedules that run us (me) ragged until time alone with the Lord slips through our fingers?

For sure, we MUST shut the door and enter a secret place in God’s presence.

Two weeks ago, we started a series of Sonship classes in DOVE Nairobi. What puzzles me is why we had not done this a while back. Many of us carry “father wounds” or “mother wounds” that should have been addressed early in our Christian walk.

Too often, instead, we keep on misunderstanding, criticizing, mistrusting and actually hurting one another. Marriages struggle. People leave church but do not settle anywhere; they develop a wandering spirit. Others become so busy, working hard for the Lord in order to gain His love and approval. We strive to fulfill the Great Commission of making disciples (Mt. 28:19-20) without recognizing we probably need—even more importantly—a healthy dose of the Great Commandment to love God with all our hearts (Mt. 22:37-39).

Needless to say, I am thoroughly enjoying this class. It is gratifying to be seeking the Father heart of God, receiving his love and sharing it with others. Maybe, just maybe, this will be the thrust that sparks the next revival we are all longing for.

Another terrorist attack has seized Nairobi. The attack that began after 3 p.m. yesterday has left several people with gunshot wounds and a total of 14 dead.

We are encouraged that before some of our elite forces entered the building, they knelt down to pray. Many stories of courage warm the heart in the midst of the pain.

This morning at about 4 a.m., security men rescued about 50 people who were still trapped at the building that houses two hotels, a bank and offices. This made a total of over seven hundred people who were evacuated from the building. When the officers then approached the hideout of the remaining six terrorists, there were explosions and heavy gunfire. But security forces moved quickly and soon after, all of the terrorists had been taken out.

Pray with us that the typical repercussions of suspicion, mistrust, insecurity and economic downturn (due to less tourism) will be minimal.

Let the Almighty God stretch forth His hand over Kenya. Thank you for your prayers.